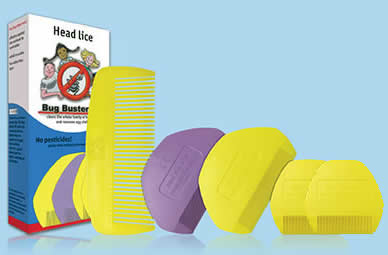 The primary findings of this trial were reported in the BMJ, Online First on the 5 August 2005. The manufacturer’s recommended single dose for insecticide treatments containing either malathion or permethrin was tested, rather than the unlicensed recommendation of applying two doses a week apart. Therefore patients who were allocated insecticide treatment were checked 2-4 days after application. The success rate proved to be 13%.

Patients who were allocated the Bug Buster Kit were checked on day 15 from beginning the combing sessions, 2 days after the final session. The success rate was 57%. During the trial, the families using the Bug Buster Kit were open to re-infestation for a longer period than those using insecticide treatment. The Kit instructions explain how to recognise re-infestation, but this trial report does not record how many families diagnosed re-infestation. However, in a further report to the International Congress of Lice, Argentina, October 2006, it was recorded that most families re-used their original Bug Buster Kit for detection and cure during a whole year.

The authors of this independent study, led by Dr Nigel Hill of The London School of Hygiene and Tropical Medicine, concluded that the Bug Buster Kit is a more sustainable and cost effective way of dealing with head lice than using the neuro-toxic insecticide treatments that they evaluated, and acceptance is high.

The study was funded by a Big Lottery Fund research grant. Community Hygiene Concern is very grateful for the support of the Department of Health, several grants from the King’s Fund and a community involvement award from the Big Lottery Fund which have enabled the charity to develop the Bug Buster Kit and produce a demonstration video in association with the Media Trust. Winning the 1998 Impact Award for excellence in community health enabled us to put our purpose-designed combs into production. Dr Hill and his colleagues found that the efficacy of this comb positively influences the effectiveness of Bug Busting wet combing.

We welcome the findings of the full scale clinical evaluation conducted by Dr Hill and his team. These confirm the positive results of the pilot trial made by Liz Plastow and colleagues which led to the Bug Buster Kits becoming available on NHS prescription, free for children. Both trials record consumer acceptance of the precise Bug Busting wet combing method and satisfaction with this specific Bug Buster comb.

The Primary Care Trusts promoting Bug Busting also welcome this new evidence which further justifies their policy decisions: the reuseable Bug Buster Kit has been offered as the first treatment option to families requiring a prescription and participation in the ‘whole school approach’ on Bug Busting Days has been encouraged. Audit shows 24% decrease in the annual NHS cost of prescribing for head lice and health care staff have noticed a marked drop in the time spent in advising parents about head lice.

The Bug Buster Kit instructions teach the user how to break the life-cycle by combing out lice over the hatching period. This takes 4 wet combing sessions at half weekly intervals. The user learns to distinguish full-grown lice, by their length (3mm), from nymphal stages. Mature lice readily migrate during head to head contact, whilst smaller lice tend to remain on the head where they hatch. If full-grown lice are found at the 2nd, 3rd or 4th session, it is a sign that the patient has become re-infested and the treatment cycle must be restarted. The user of a Bug Buster Kits knows what is going on, instead of blindly trying to kill lice and their eggs. This is empowering and sustainable. The earlier pilot trial followed the progress of all participant families none of whom failed to finally eradicate infestation using a Bug Buster Kit.

According to the latest clinical evaluations there is NO PRODUCT on sale which KILLS LOUSE EGGS with certainty. The advice in the Department of Health leaflet ‘The prevention and treament of head lice’ is to check thoroughly for baby lice emerging from unsuccessfully treated eggs at 5 and 12 days after application. Usually formulated products have to be used repeatedly to obtain a cure. Multiple applications are costly, time-consuming and may be unhealthy .

Ibarra et al. Raising the standard of the labelling and instruction leaflets of treatments for head lice. Available online at:
http://www.bmj.com/content/330/7505/1423 (published 4 April 2006)

Roberts et al. (2000) Comparison of wet combing with malathion for treatment of head lice in the UK: a pragmatic randomised controlled trial. Lancet 356: 540-4.

Hill et al. Clinical evaluation of the Bug Buster Kit for the control of head lice at the community level: Effectiveness, acceptance and sustainability. (Presentation to the Third International Congress of Phthiraptera (Lice), Buenos Aires, October 16-20, 2006)